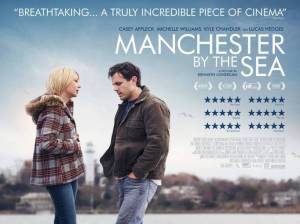 Now and then a film comes along that lingers in the mind of the viewer long after it is over leaving a feeling or impression that just can’t be easily lost. In the case of movies like this, rarely is it a happy, feel-good movie. The stories that leave such lasting impressions touch us in an uncomfortable way and shake us deep down. It has been quite some time since I have had these feelings and emotions after leaving a theater but, Kenneth Lonergan’s Manchester By The Sea has left me with feelings and emotions that won’t soon be shaken. 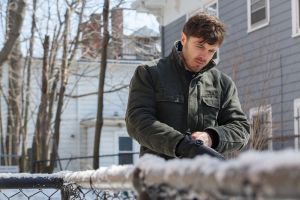 handyman in the Quincy area of Boston who appears to be more or less just existing on a daily basis. Lee is informed that his brother Joe has died and Lee has to come back home to Manchester and settle things for his brother and be with his 16-year-old nephew. While making all the arraignments and settling the estate, Lee is informed that he is now the legal guardian of his nephew, Pat. Lee is completely unprepared to handle this responsibility and the more time Lee spends in Manchester, the more he is reminded of why he is ill equipped handle this responsibility. Lee is constantly haunted by past mistakes and a life he has tried so hard to forget and erase from his mind.

As I sit here trying to express my thoughts and views of Manchester, I find the right words incredibly hard to find. It is hard to put the depth of emotions that the film brings out, into words. Lonergan manages to capture humanity at its most difficult while proving that not everyone gains closure no matter how desperately they want and need it. His brilliant and articulate script are matched only by his visual way of telling Lee’s tragic and intense story. The mixture of flashbacks is used so expertly, that with every new scene we are made to understand Lee more and more. Casey Affleck’s performance is moving and captivating on a level that most actors only wish they had the ability to reach. With every word and glance and the gaze of his eyes, you can almost feel what he does in the pit of his stomach.

There is no doubt why this film is going to be on the tips of everyone’s tongue during the upcoming awards season. As for the film’s star, Casey Affleck, he has cemented himself amongst the greatest working actors and is poised to walk away with just about every award possible for him. This is the role that will define him as an actor, and he should be proud to have this as the feather in his cap.

This picture is not one of a tragedy that turns into hopefulness leaving us crying with joy and relief for the characters. This story is one that is real and raw and may make you look at someone and see things differently. Not everyone gets over tragedy. Not everyone heals and moves on; sometimes people just exist, and they are damaged and broken.

someone would choose to tell such a depressing and sad story. This would be a valid thought, but sometimes we need to experience sad and tragic art so that those producing the art and those viewing it can expunge the feelings we all have deep inside us.

Don’t look for Manchester By The Sea to give you a boost but don’t think that experiencing the depths of emotions not often tapped into can’t also make you feel alive.

Great, diverse, game changing actors are hard to find and seeing them flex their muscle in the middle of their career and prove their greatness is even more rare. Christian Bale is in the throws of that period in his career. After winning an Oscar for his role in The Fighter, one might take it a little easy and make a little money before continuing his conquest of acting. Bale has not.

Bale would go on and make The Dark Night Rises and to conclude his great run at Bruce Wayne/Batman. The role in the Dark Knight series is the role of a lifetime and along with an Oscar would settle any actor down and let him just make his money in his and career because everything has been accomplished. Bale is not of that sort. He continues to challenge himself. Bale’s newest film is just proof that he is not done challenging himself and his fans.

In Out Of The Furnace, Bale plays Russell Baze, a good man who is jailed after a drunk driving accident leaves a person dead. Upon his release he once again feels the need to keep what little family he has, together. His family consists of his younger brother Rodney and his uncle. When Rodney, a veteran who is troubled by his time in Iraq, finds himself in deep water with the worst kind of people, Russell is forced to enter this world and take vengeance on those people.

Rodney is just as wonderfully played by Casey Affleck as Russell is by Bale. The raw emotion burned on the screen by both men is seared into the minds and emotions of the viewer as well. Taking place in the “Rust Belt”, which is a particularly heart breaking area of the country,  is a near perfect location in that it lends itself to the hardship in Russell’s life and mirrors his struggles.

Directed by Scott Cooper, who previously directed Jeff Bridges in his Oscar winning role in Crazy Heart, proves he is among directors to be noticed. Cooper has again brought out top performances from his actors. At the same time he has made a visually stunning and even haunting film. His vision of the battered and worn out “Rust Belt” area truly shows the hardship of the area that was at one time a thriving area. He has made the community in which they live a character itself.

This is a film that could possibly hold some heavy Oscar nominations but at the same time it wouldn’t be a shock to see it shut out. Never the less, it is strong, powerful film that shows suffering and hardship in a way and world many only hope doesn’t exist but does. With outstanding performances top to bottom the unflinching and real heart and emotion that comes through is unquestionable. The other side is the truly terrifying side of humanity shown in Woody Harrelson”s character and the world he lives in and rules. It is a film not to be missed and experienced. It will leave you quite moved.

In Honor of Ben Affleck’s big night at the Golden Globes, I felt it appropriate to repost an article I wrote after seeing the trailer for Argo that was originally posted back in May. Congratulations to Ben and his wonderful work on Argo.

All actors and directors and writers have various highs and lows in their career and some of these have been commented about on this site and documented in the world of entertainment journalism quite well.

There may be very few careers that have been such a roller coaster of extreme highs and deep lows, as that of Ben Affleck. Affleck is set to release his third directorial effort in October. It is entitled Argo is set during the Iran hostage incident. The trailer alone will leave your jaw open salivating for the release of what very well may be a big Oscar contender with an all star cast, including Affleck in the lead role.

Ben Affleck had a small steady career starting to carve for himself appearing in various successful indie movies a few for his friend, director Kevin Smith when he was at the height of his talents with roles in such films as Mallrats and Chasing Amy and a somewhat breakout role in the cult icon film Dazed And Confused. In 1998 he became a household name over night when he and childhood best friend Matt Damon won the Academy Award for best original screenplay for Good Will Hunting. The two friends were on the fast track to fame, fortune and success. With a few big blockbuster movies and decent roles in fine movies following Good Will Hunting like Armageddon, Shakespeare In Love, Boiler Room and the money making but disappointing Pearl Harbor and then things started to slide. It wouldn’t be far fetched to point the start of the slide at The Sum Of All Fears which while was not that bad a movie, quite entertaining actually, it was the role he played that people weren’t happy with. the role of Jack Ryan had come to be loved because of Harrison Ford flawlessly portraying the tom Clancy character. While Affleck only played a young Jack Ryan and didn’t continue the story or Ford’s version of the character people were immediately turned off. This is where the mudslide begins with the widely panned comic book/superhero adaptation of Daredevil and followed with a string of movies one as bad as the next almost. Gili with then girlfriend Jennifer Lopez has made the top of various worst all time movies lists. Even re-teaming with friend Kevin Smith for Jersey Girl didn’t help as it appeared Kevin Smith’s better days were behind him and on to Surviving Christmas and Clerks 2.

Affleck next took a role that appeared to be a big departure since it was a much smaller supporting role as he played the almost mythic actor George Reeves in Hollywoodland and even received Oscar buzz for his role. It appeared to be a step in the right direction.

Ben would take a three year break during which his life and career would change drastically and forever. Ben stepped behind the camera to direct his first feature length film and cast his little brother in the lead role. Based on the Dennis Lehane novel, Gone Baby Gone would go on to blow everyone away as to how good of a film Affleck could make and maybe this was his true calling. He played Gone Baby Gone somewhat safe since it is based in his home town Boston he had an advantage going into the project, but, it couldn’t have been a better first movie for him to direct.

He would return to the screen in what again wouldn’t be a leading role but still a role with depth and that had some teeth to it with 2009’s State Of Play staring Russell Crowe based on the BBC miniseries.

Picking up a couple of roles here and there since he then returned behind the camera in 2010 with another Boston crime tale with The Town which he would also star in and would again gain wide praise for his directing ability and his love letters to his hometown of Boston.

It has been 2 years since The Town and Affleck is back behind and in front of the camera for Argo. He leaves the comfort of Boston for the hostile territory of late 70’s, early 80’s Iran. He has found his voice and true talent. He may never win an acting Oscar like his friend Matt Damon may do someday but he no doubt is leaving his mark, albeit early, as a director. His career is hitting the highs it once did when he joyously received his Oscar with friend Matt Damon and things truly are looking up for Ben.

A Blog For Every Movie Lover