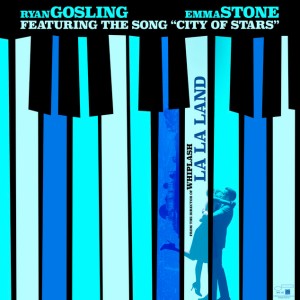 Hollywood has a long history with nostalgia; you could even make a case that the whole film industry is based on nostalgia. We love to be taken back to different times and places; we watch certain movies so they can bring back old feelings we want. Some filmmakers passion projects are rooted deep in nostalgia; Woody Allen has made an entire career on his love of the past.

Young rising writer/director Damien Chazelle has released his newest film, and it is full of his love of old Hollywood and more. Chazelle shows his love for the lavish classic musical that were staples every year during the golden age of movies. Of course, this is not the first time that a film has drawn in an era of movies that is long since the past. In 2011 everyone swept away with The Artist, a modern day silent film like those of the days before recorded sound on film. In hindsight, The Artist feels more like a gimmick film now than a genuinely great movie, and many of its awards were doled out because it tugged at the nostalgia muscle of many in tinsel town.

La La Land is the story of Mia, played by Emma Stone, and Sebastian 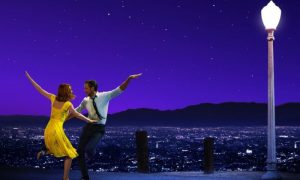 played by Ryan Gosling, who are two young people trying to make it in the cutthroat world of L.A. and show business. They meet and soon find each other irresistible and try making their dreams come true while at the same time falling in love. Mia is desperate to be an actress and fulfill her childhood dreams While Sebastian wants nothing more than to own a jazz nightclub and preserve the feelings he feels towards the classic and traditional jazz music he loves. As Mia and Sebastian work towards their goals, they feel themselves begin to separate from each other and soon difficult choices need to be made. Their love is undeniable but is it as strong as it needs to be for them to breakthrough?

La La Land begins with a well choreographed lavish dance number on the freeways of Los Angeles with everyone leaving their vehicles dancing in the middle of gridlocked traffic. The vast number that makes the opening of the film left me a little uncertain as to what style and flow the movie would have because the previews of the film were more set up to show the visual beauty rather than the way any story would be told. Mia is then introduced first, and a small glimpse into her life is shown before we are shown Sebastian’s world. I have to say it took me a good 30 minutes before the story started to flow, but once it did, it pulled you in so deeply and yet gently that you are 100% immersed in their lives. 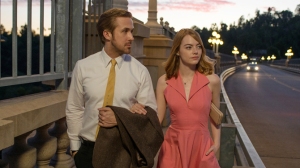 The film does not follow the typical musical blueprints of the old Gene Kelly or Danny Kaye style films from 70 or 80 years ago, but it is a love letter to that way of storytelling none the less. While music is the life force flowing through the film, it helps move the story along as well as the lives of Mia and Sebastian as opposed to being the only purpose of the film. We become enthralled with the relationship they both share and where it will lead. Sebastian is in love with the jazz music of the 1920’s and 30’s and is afraid the whole style of jazz is dying, and when he is united with an old musician friend, he isn’t a fan of his new style of jazz. His friend tells him that while he is afraid that jazz will die out, he refuses to change with the times and advance it so that people of a newer younger generation can appreciate it as a whole. This reflects the film itself and the state that musical films are in right now. When musicals are made they do seem to be old love letters to the musicals of old, there doesn’t appear to be anything new that would bring old and new together. Chazelle has made his attempt at bringing that out with his version of a new musical in films. He has in essence challenged others to make musicals more prevalent again, but at the same time to give them a new look and feel that will draw everyone back.

La La Land is one of the heavy favorites going into award season and it is for a good reason. Part of the reason that it is garnering so much attention is that it is a return to musicals, and it stirs up the nostalgia of all the awards committees, but in this turn of the musical, Chazelle has made it new and given it a life of its own. Chazelle has established himself as a new and exciting voice in filmmaking in a very short amount of time and gave movie fans quite a bit to be excited about.

A Blog For Every Movie Lover